America’s food system is currently enslaved by bureaucratic shackles that prohibit the free exercise of food choice. While other freedoms were enshrined in the Bill of Right, the freedom to choose food was not. The tragedy is that most folks don’t realize the ramifications of this prohibition.

As an example, let’s assume Joe and Pete are friends.  Pete raises two hogs, giving them love and attention unparalleled, and these happy, healthy critters meet their end in Pete’s backyard. Joe helps kill, scald, and cut up the hogs. Pete only needs one of them and Joe wants the other one. Pete cannot legally sell the other hog to Joe. Why? Because in the U.S., no pork can be sold without passing through a government-licensed processing facility, being inspected by a government agent, and cut and packaged in a licensed fabrication room. Those licenses cost a million dollars and require a million-dollar investment in building and equipment.

While that cost may not deter a multi-million dollar outfit, it’s way more than Pete can afford to get one pig to his friend Joe.  Their relationship and the transparency of their arrangement is not like someone walking into Costco or Walmart to buy pork chops. The only similarity is the transfer of sustenance from one person to another; in all other aspects, the transaction is completely different. Not to mention the quality of the pork. In this scenario, buyer and seller know each other.

By criminalizing such a friendly, neighborly option, the government unnecessarily shackles food choice options to a regimented licensure procedure that reduces competition in the marketplace. That lack of competition from alternative transactions, engaged in by consenting adults exercising voluntary freedom of choice, denies people thousands of food alternatives at affordable prices.

What could possibly be the justification to keep Pete and Joe from doing business?  The reason is simple:  safe food. The assumption is that unless a food inspector deems the hog safe, deems the procedures used to kill, cut, and package it as safe, and that the tools and facilities surrounding the work are safe, Joe might be killed by unsafe meat. While the meat could be unsafe, the risk is extremely low. If Joe believes his microbiome will flourish more with Pete’s pork than Walmart government-licensed and -sanctioned pork, why should he not be allowed to engage in that decision on behalf of his microbiome?

Who owns Joe? Who owns Joe’s microbiome? In a nation that prides itself in getting the government out of bedrooms and bathrooms, you’d think bellies would follow. They don't. Bellies still hold a special place of regulatory protection, known as government oversight, that makes sure Joe can’t buy pork from Pete. Curiously, if Joe pays Pete for the hog anyway and takes his sausage, pork chops, and ribs home, he’s not a criminal. The only criminal is Pete when he accepts payment. Pete could give away the pork. He could charge Joe a butchery class fee and give him pork as a perk for paying for the instruction. But if he sells Joe pork, he’s a criminal.

To show how hypocritcal this is in our society, consider prohibitions on drugs, including prescription drugs. In the drug wars, the prohibitions exist on both sides of the transaction:  both buyer and seller. I can’t sell you cocaine. If you buy it, you’re equally guilty. But with food, the prohibition is only on one side of the transaction:  the seller.  If you can find someone to sell it to you illegally, you can enjoy the food, feed it to your kids, and even make a dish for the church potluck with it without penalty. If this unlicensed food were truly harmful, wouldn’t you think a consistent application of the safety argument would extend to both buyer and seller like other things? This brazen inconsistency in safety application clearly indicates the prohibition is not ultimately about safety; it’s about market access. It’s actually about economics, not safety.

What if Pete is a fledgling farmer and he’s trying to start a small farm? How can he create a high quality pig operation and sell the special pork to folks like Joe if he can’t get them processed efficiently? And why should he have to load them on a trailer and take them to a government-approved facility, paying hundreds of dollars for work performed by people who didn’t raise, feed, and love on the hog all its life? Hogs have been butchered in backyards since the beginning of human civilization. People like Pete and Joe have engaged in friendly transparent food commerce for millennia.

That simple transaction is how aspiring farmers gain a foothold in the marketplace. That is how people like Joe looking for healthier, nutrient-dense, happy hogs find them and enjoy their offerings on the family table. Unfortunately, most Americans don’t realize how many options they could enjoy were Pete and Joe freed to engage in food commerce. While the story of Pete and Joe revolves around hogs and pork chops, countless other relationships like this could, would, and should revolve around meat pie, charcuterie, beef, chicken, ice cream and quiche, not to mention pies, broth, and salad.

A flourishing food choice climate would bring a whirlwind of innovative options to the marketplace. Imagine a single mother of three living in an urban food desert.  She has an entrepreneurial spirit and a vacant lot next door. She puts in a garden and some rabbits (they’re quiet) and from her microfarm starts making rabbit pot pies for her neighbors. Within 10 minutes of launching her enterprise, she’d have half a dozen bureaucrats beating down her door demanding HACCP (Hazardous Anlyasis of Critical Control Point) plans, kitchen inspection, commercial building requirements and who knows what else. This is America’s food system under slavery. She’s denied a food service opportunity. Her neighbors are denied great food. All parties lose.

Thousands and thousands of farmers and food entrepreneurs that otherwise would exist do not exist, cannot exist, and will not exist in the current enslavement to a bureaucratic overseer. Unregulated and uninspected food transactions between producer and consumer, between food artisan and patron, do indeed carry risk. But the foodborne pathogen deaths and nutritional deficiencies encouraged, sanctioned, and allowed in the current regulated system is certainly no guarantee of safety. Recalls and tainted food, not to mention slow-release problems from junk food, plague our society.

In the end, safety can never be guaranteed. Every person chooses their risk. We choose risks religiously by deciding where to place our faith. We do it practically by deciding where to put our faith—in government bureaucracy and regimented orthodox systems, or in people we know and trust. If Joe doesn’t have freedom to choose the fuel for his own microbiome, what good is the freedom to assemble, preach, or pray? Choosing the fuel for our own microbiome is certainly as intimate and personal a decision as what to say or what to write.

The best remedy for Pete and Joe’s predicament, I suggest, is a FOOD EMANCIPATION PROCLAMATION. In one fell swoop Abraham Lincoln freed the slaves. In one more fell swoop, a president could bring America’s food system out of captivity and emancipate it once and for all. Petes and Joes could engage in neighborly food commerce, creating an explosion of farm and food entrepreneurs bringing better, cheaper diversity to America’s food marketplace. And what of the giant food industrial conglomerates currently sitting atop this government-insured slave trade? Demand for their overpriced nutrient-deficient drivel would drop precipitously. Democratization in food commerce would bring vibrancy through diversity.

What about safety? Fortunately, we now enjoy unprecedented self-regulated audit capability. The butcher, baker, and candlestick maker of yesteryear lived in the village over their shops. Scale and localness guaranteed that the good ones succeeded and the bad ones didn’t. Industrialization scaled the butcher, baker, and candlestick maker to unprecedented size, hidden behind razor wire and guarded entry gates. This segregation created ignorance; ignorance created fear; fear created demands for government oversight. But then along came Uber. Who would have guessed that millions of people would hop into cars with regular unvetted folks in unvetted cars and trust the driver to take them to the Hilton? It all worked due to the instant and transparent feedback loop. Uberizing food is now possible due to bringing the village voice to a global platform.

Current food enslavement to a bureaucratic licensure government plantation--developed during the industrialization of the butcher, baker, and candlestick maker--hidden behind security fences, these massive entities germinated fear in the populace, which asked for industrial-scale regulators to check up on these behemoths. What society gave up in this request was food freedom. Unwittingly, to be sure, historic freedom--enjoyed when the butcher, baker, and candlestick maker were embedded at neighborhood scale within the community--eroded to a plantation reality where government agents and massive companies control food.

Now, millions realize that culture traded the risk and personal responsibility inherent in freedom for the security and enslavement of food tyranny.  Pete and Joe are casualties of that tyranny. Pete wants to sell. Joe wants to buy. But neither can engage in primal liberty choice. A FOOD EMANCIPATION PROCLAMATION allowing direct food trade would give Pete and Joe their freedom and take the shackles off millions of Americans yearning for food choice. If a national proclamation is too disturbing, simply allow any local jurisdiction to try it as an experiment (this is currently illegal too) wherever and whenever citizens wants to exercise food liberty. If people start getting sick due to unsafe food, tweak it. But if people get healthier, and farms start to prosper, and earthworms dance, it’ll be the best solution that liberty ever offered our nation.

For the last century, every time food hit a bump in the road, the societal response is more government control. Fewer options. Harsher criminality for Pete and Joe. Worse food. New terminology:  food allergies, gluten intolerance, glyphosate-induced autism, diabetes, obesity, C. diff, E. coli, campylobacter, mRSA, high path avian influenza. Just 50 years ago none of this lexicon existed in common language. Today, it’s endemic. Thank you, masters of the slave trade! If we’re going to fix the food and farming problem, we must reverse the tendency to make more laws, more agencies, more licenses, and more bureaucrats. That is exactly what’s gotten us into the situation we’re in. We need to reverse course and try freedom for a change. That will make all the difference. 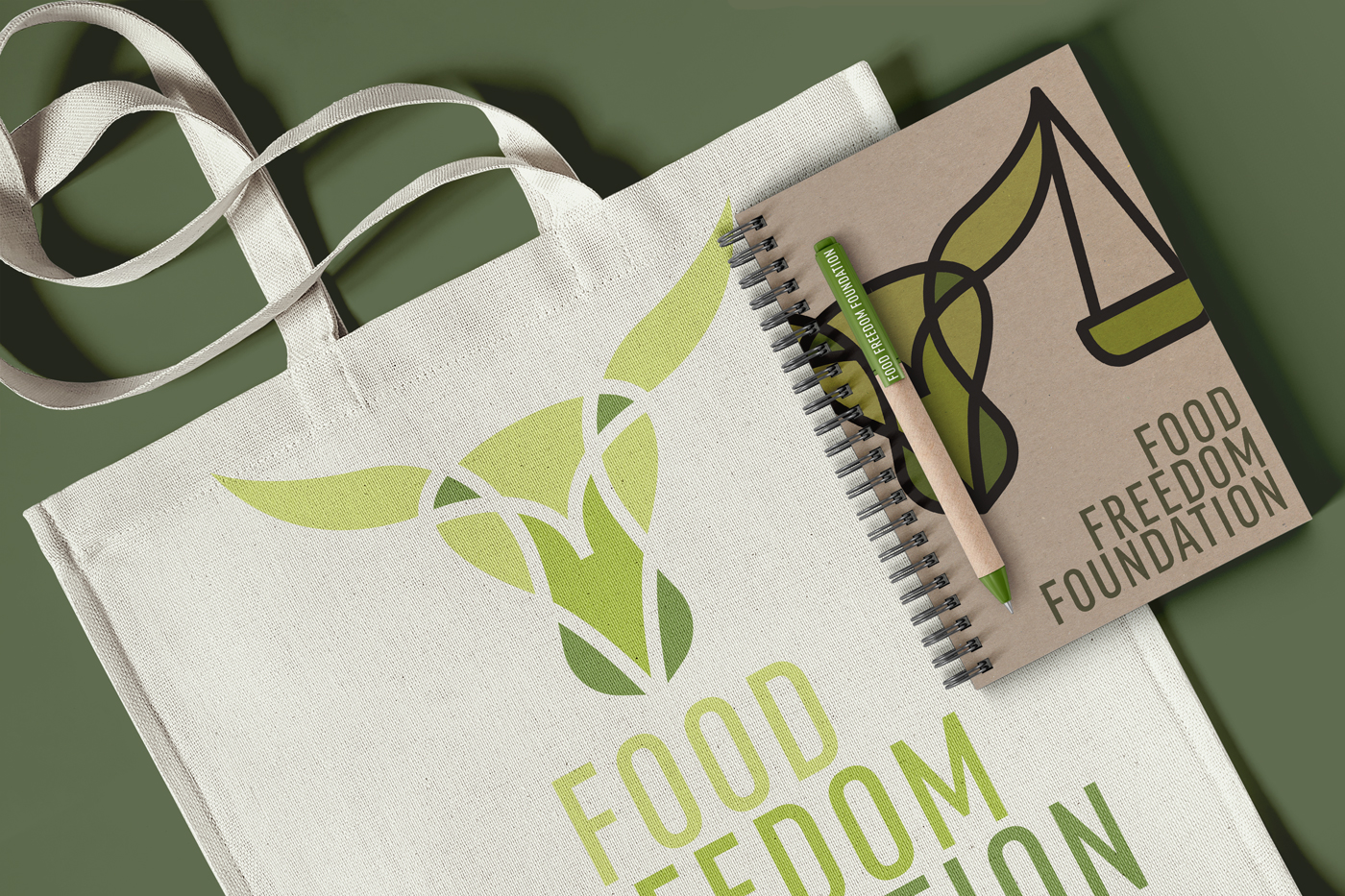 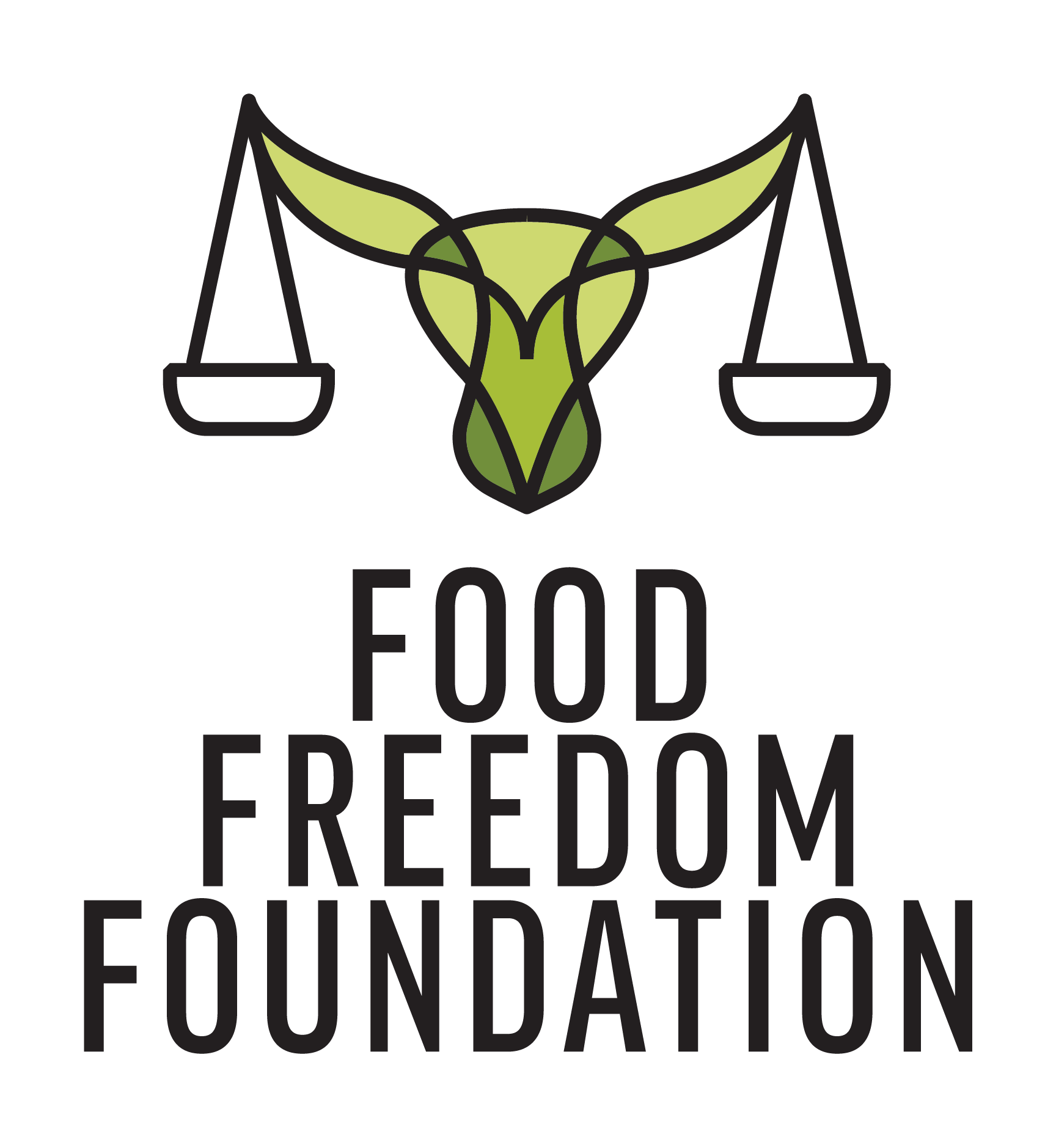 Thank you! Your submission has been received!
Oops! Something went wrong while submitting the form.
© FOOD FREEDOM FOUNDATION 2022
website by NOMOS | Marketing
Privacy Policy
Food Freedom Foundation is a registered 501(c)(3) nonprofit under EIN: 47-3917847. Donations are tax-deductible to the fullest extent allowable under the law.